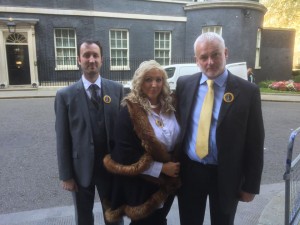 I was recently invited to take part in a demonstration in Parliament Square in London. It was to highlight the flaws within the organisation of Jehovah’s Witnesses when it comes to child protection. This is a subject close to my heart, the thought of anyone suffering child abuse is very upsetting but having a system in place that allows the perpetrator to get away with it is absolutely wrong.

Sadly the ‘Two Witness’ rule the Watchtower stands by is allowing just that to happen. Instead of viewing child abuse as a crime, they see it as a sin.

Therefore I was more than willing to be interviewed by the [press] and to deliver a letter to the Prime Minister requesting that faith based groups report child abuse immediately to the authorities instead of dealing with such matters internally.

It is my hope that Jehovah’s Witnesses change their stance and stand on the side of morality rather than their own flawed beliefs. The very scriptures they say they follow would not allow a rape to go unpunished even with no second witness, so why do they ignore the scriptures that don’t backup their ‘Two Witness’ rule?

Background to the ‘Two witness’ rule

When an allegation of sexual abuse is made the elders are requested to contact their head office first, and to follow their instructions. The allegation then is investigated internally. The ‘Two Witness’ rule is found in [Deut 19:15] and if there is no second witness and the abuser denies the allegation the matter can go no further. However compare this to [Deut 22:25-27] which is never used in their rules and regulations despite it specifically dealing with sexual crimes.